AFTER CONNECTING NORTH AND SOUTH OF MM WITH SKYWAY 3, SMC STARTS WORK TO LINK EAST AND WEST OF METROPOLIS 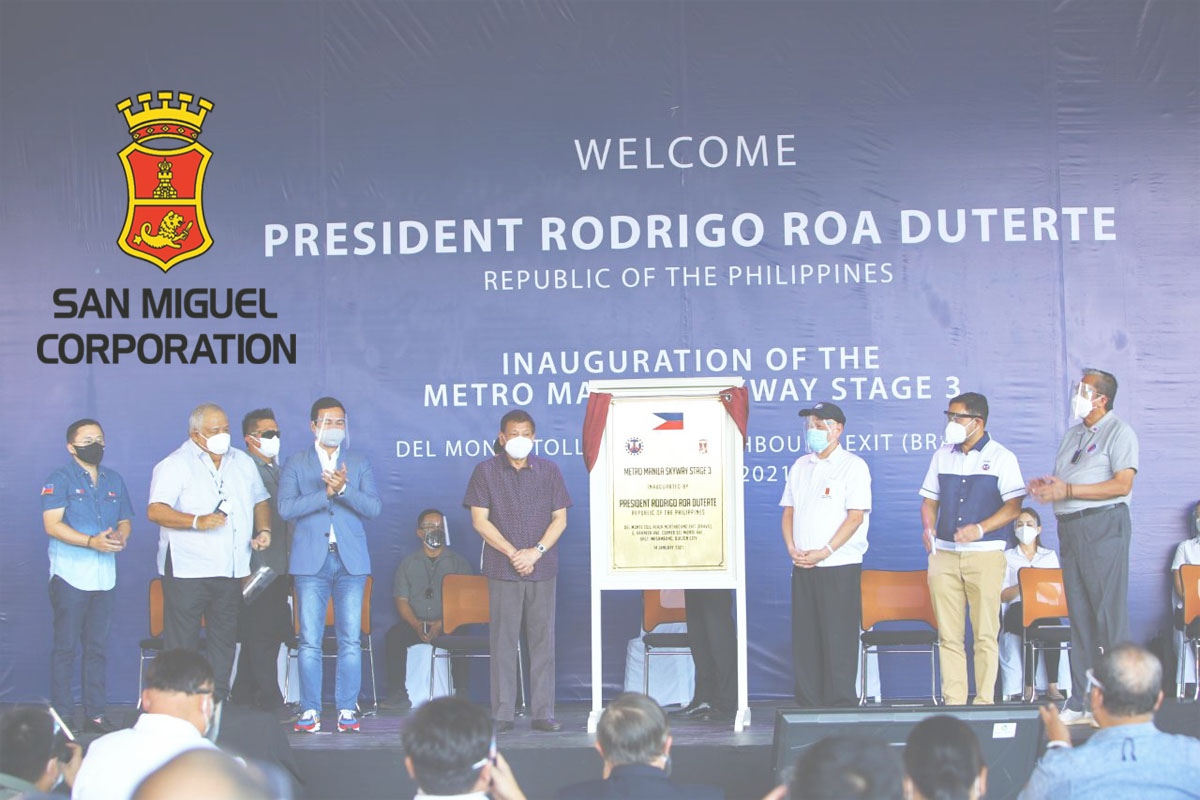 Duterte, together with SMC president Ramon S. Ang, led the ceremony to officially open all seven lanes of Skyway 3, which seamlessly connects the South Luzon Expressway (SLEX) and North Luzon Expressway (NLEX), via 18 kilometers of elevated toll road, the longest in the country. It is also expected to significantly decongest EDSA and other major Metro Manila roads.

Ang credited President Duterte for his strong leadership and political will, which he said played a significant role in settling right-of-way issues that delayed the massive infrastructure project for years.

“Because of the strong leadership of President Duterte, and with the help of his hands-on cabinet secretaries and economic team, we were able to finally resolve right-of-way issues and complete Skyway 3,” Ang said.

“This is a game-changer for our economy, especially now that we are still dealing with the pandemic. By providing seamless access between north and south, we also unlock the true potential of our provinces,” Ang added.

With the full opening of all seven lanes of the 18-kilometer Skyway 3 from Buendia, Makati to NLEX, ang Ang said that a huge number motorists will now have an alternative to EDSA.

Since its soft-opening last December 29–free to the public until Feb. 1—some 71,000 vehicles per day have been passing through Skyway 3, using only four lanes initially opened.

“At full capacity, with 7 lanes available, Skyway can easily handle 50% of Edsa traffic, or 200,000 vehicles per day. Together with the existing Skyway 1 and 2, the Skyway system now has 38 kilometers of elevated expressway with 36 on- and off-ramp access points. This will greatly contribute to decongesting Metro Manila traffic,” Ang noted.

To fastrack construction, SMC purchased all the properties along the project’s right-of-way, in order to meet the owners’ requirements. The company also funded the re-construction of three bridges, the San Juan Bridge, Concordia Bridge, and Sevilla Bridge. Though not part of Skyway, these old bridges near its alignment had to be demolished and rebuilt as they had deteriorated over time and had become a safety hazard.

Ang committed to Duterte that SMC’s efforts to help the country and the economy, will not stop with the Skyway Stage 3 project.

“We will continue work to further decongest Metro Manila by linking east and west of the metropolis, through the Pasig River Expressway (Parex) project,”Ang said.

The Pasig River Expressway project is a 19.4-kilometer, six-lane elevated expressway along the banks of the Pasig River that will complete the north-south, east-west link, connecting R-10 in Manila, Edsa, and C5 and decongesting Rizal, Cainta, and Marikina. It will provide faster, alternative access to the business districts Makati, Ortigas, and BGC. He said the project can be completed by 2023.

Meanwhile, Ang said work has also started for the construction of the Manila International Airport project in Bulacan province, a sustainable solution to decongesting air traffic congestion in the country.

Touted as the single-largest investment ever in the Philippines, the airport project will connect to major thoroughfares in the metropolis. It will have four-parallel runways and modern, world-class facilities.

Ang set the opening date of the massive airport project for 2025. Two major expressways connecting to the airport will also open by 2023.

Meanwhile, the ongoing Skyway Extension project, which will extend Skyway’s reach in the south, to Susanna Heights, Muntinlupa, is set for completion this year.

Both the Parex and Bulacan airport projects are to be connected to the Skyway system, further extending the country’s infrastructure network.

Ang also highlighted the job-creating capabilities of new, major infrastructure projects. Apart from the workforce required to build them, they also give rise to many smaller industries and boost local economies.

“All of these, Mr. President, will solve our decades-long problem of land and air traffic congestion. Together, we are building the foundation for future economic growth that’s inclusive and sustainable. We are also investing in many other industries across the regions, from food and beverage production, agriculture, power security and soon, renewable energy. This is the best way we can meaningfully contribute to nation-building. We are committed to sustainably re-invest what we have, create more business opportunities, generate more jobs, and spread growth across the archipelago.”

Ang, who was celebrating his birthday, also dispelled speculation that he is eyeing a political run. “Perhaps because of our company’s efforts to help our country, many are thinking I am planning to enter politics. I have no such ambition. All these projects we’ve completed, and all the new ones we’re about to start, are part of our long-term vision we first articulated more than a decade ago, when we said we wanted to be a true partner in nation-building,” Ang said.

“We have always believed that SMC can do a lot to help our country, by investing in industries and sectors that will accelerate its growth. We love our country, it’s the only one we have, so we should all do what we can to lift it up and help Filipinos. This pandemic has only made that commitment deeper and stronger.”

Meanwhile, Ang cited Secretary Villar and the Metro Pacific Tollways Group, operator of the NLEX, and business tycoon Manny V. Pangilinan, for making possible the extension of the original endpoint of Skyway 3, to just before the NLEX toll plaza.

“Finally, we now have a seamless connection between SLEX and NLEX. I thank Secretary Villar and the MVP group led by Mr. Pangilinan for making this direct link to NLEX possible,” he said.

He also paid tribute to engineers and workers who worked on Skyway 3, and all stakeholders who helped make the project a reality.

“What you see here is the product of the talent and skills of our very own Filipino engineers and workers. It is the result of years of hard work and collaboration between the government and the private sector,” he said.