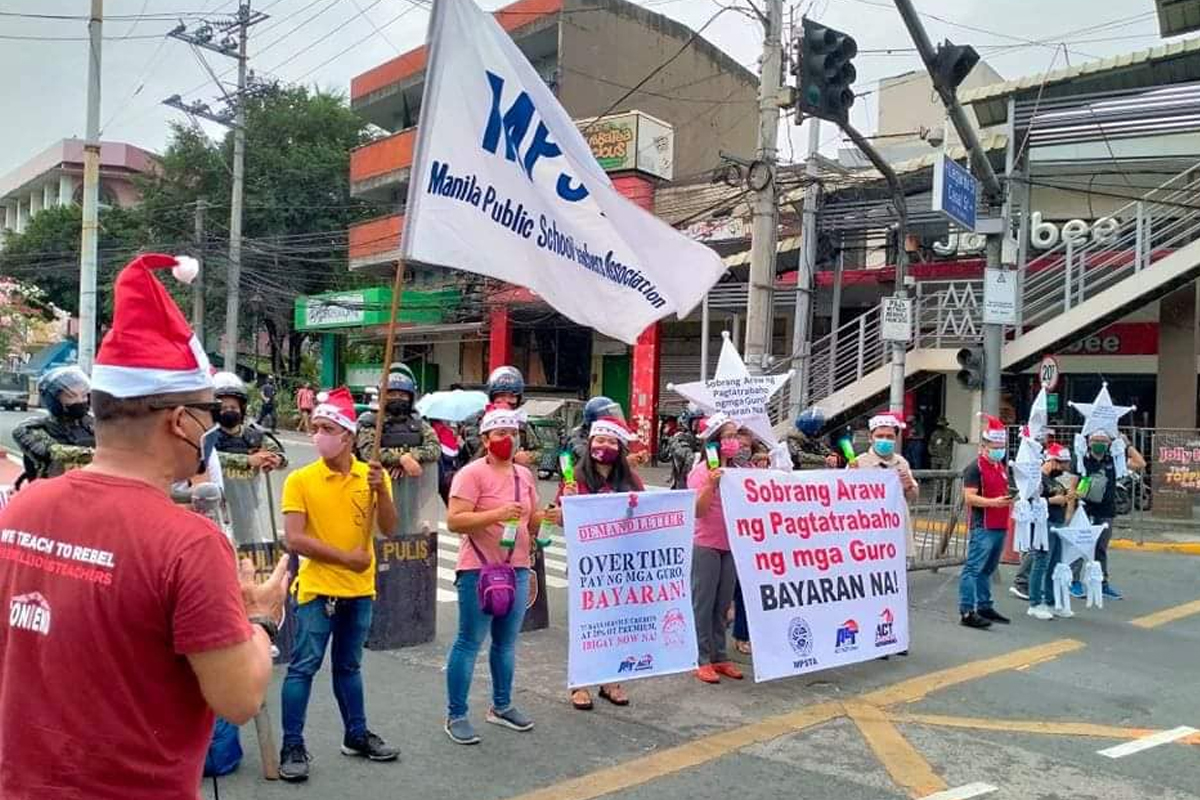 MEMBERS of the Manila Public School Teachers’ Association, an affiliate of the Association of Concerned Teachers-NCR Union, held a Christmas-themed protest in Mendiola to mark day two of their “9 Days of Christmas” campaign.

The group hung ornaments and lanterns on which were written their 5 urgent demands.

“We’re inching closer to Christmas, but we’re nowhere near having our fair and long fought for demands fulfilled; hence, this protest action and many others we have led and will hold in the future for the advancement of teachers’ welfare.

Mendiola has always been our stage where we can air out our grievances and calls, and we wish that all who seek to be seated in that [Malacañang] office will prove their intention and capacity to serve the nation by addressing the urgent needs of teachers and the entire education sector,” Louie Zabala, ACT NCR Union Vice President and MPSTA President, said.

“Our calls for pay hike and better benefits were toyed with by the Duterte administration during his campaign for Presidency, but ultimately he never came through with his promises,” Zabala said.

“We suffered great state neglect and abuse from the present admin—which, in turn, only further strengthened the bases of our demands. It’s clearer than ever for us now: any public servant, or vying to be, who has no concrete plan to address the issues of education frontliners and the entire sector has no real heart for its citizens and for the country. Education, after all, is vital to national development,” he added.

ACT believes that a salary upgrade should be an “immediate” measure to alleviate the plight of teachers.

Student Guide LOOKING FOR CREATIVE JOBS IN THE NEW NORMAL? CHECK OUT THIS HUB THAT HELPS THE LOCAL AD INDUSTRY THRIVE THIS YEAR
CHOLO KATIPUNAN / 29 September 2020

Health and Wellness WHAT’S HAPPENING IN INDIA, WHERE THE WORLD’S WORST CORONAVIRUS OUTBREAK IS CURRENTLY TAKING PLACE
PAULINE NACAR / 12 May 2021